I'm way behind in my blog - #ALAN2015 and it was simply too busy with presentations, interesting people to talk with and activities.  I was too slow in booking a place on the bus to Mount Megantic - the first declared IDA Dark Sky Reserve and missed out on the bus breakdown, a 2.5 km walk in the dark and arrival back to the hotel in Sherbrooke at 2am.  I've now had a couple of rides on the yellow Bluebird buses - just like the busses in South Park.  I think someone doesn't like school children.  The schoolchildren of Sydney get luxury - especially when they don't give up a seat for an adult.  These buses look like they would fit right in on the streets of Bangkok - just too much bling. 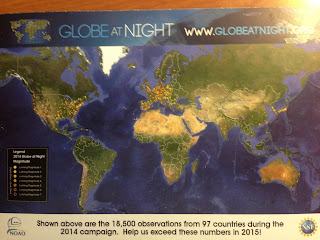 On the way to #LPTMM2015 - the conference preceeding #ALAN2015 I met Connie Walker an astronomer from NOAO (National Optical Astronomical Observatory) Connie has an education role as well as being astronomer and she organises the Globe at Night campaign.  The Globe at Night campaign is an attempt to monitor sky brightness across the world by encouraging participation in estimating the limiting magnitude of your local sky. Have a look at the map for 2014. I hope your city is not embarrassed.  Connie I shared the shuttle bus trip from Montreal to Sherbrooke the morning after a midnight arrival in Montreal - finding the shuttle bus was an adventure in itself, we made it Sherbrooke without a problem.  We spent the afternoon wandering around Sherbrooke doing an inventory of luminaries - some very interesting ones were found - I'll save that for later.
Posted by Mike Chapman at 11:11 PM